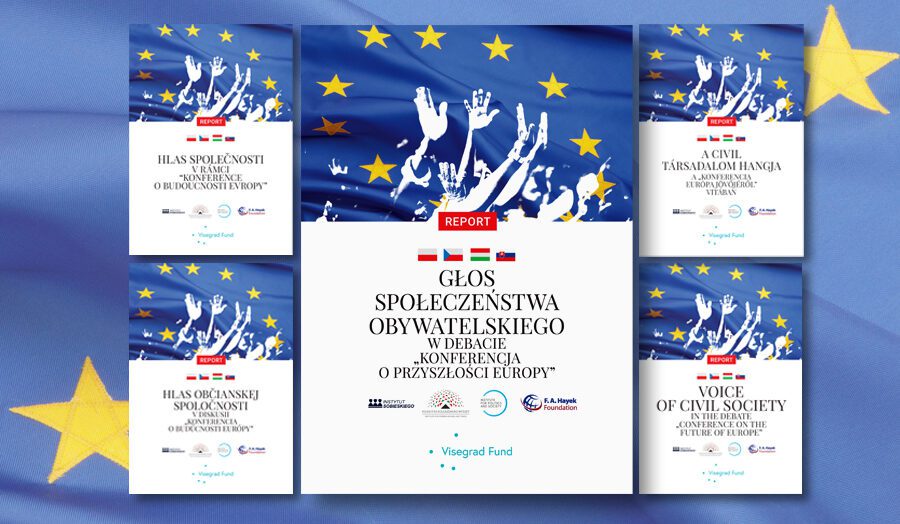 Experts from the Visegrad Group prepared a report entitled “The voice of civil society in the debate Conference on the future of Europe“.

The report is a voice of experts from the Visegrad Group (V4) in the ongoing Conference on the Future of Europe, which began on May 9, 2021. These are the largest international consultations since 2005 organized by European institutions, but also the first consultations involving the broadly understood voice of citizens and involving civil society. The aim of the consultation is to answer the question “What kind of Union do the citizens of the Member States want?” and communicating these expectations to policy makers. The conference involved randomly selected Europeans in the discussion on the development of European integration, and also involved them in developing political decisions to counteract the deficit of democracy in the European Union (EU). A special place in this discussion was supposed to be occupied by representatives of the civil society organized in the form of think-tanks. The problem of the discussions on the future of Europe so far has been to concentrate the debate mainly on Western Europe.

The discussion in the project gathering representatives of think-tanks from the Visegrad Group focused on three main areas: political and systemic issues, challenges in energy and climate policy, and the topic of digitalisation.

In the European debate, it is important to look for allies and speak with the “voice of the region”, which is stronger than the voice of individual states. We treat this report as bringing the intellectual thoughts of V4 experts to the international debate on the development and future of the EU. Our solutions, especially from the perspective of the outbreak of the war in Ukraine, as well as the recovery of EU countries from the Covid-19 pandemic, are aimed at proposing ideas uniting European nations, which – in our opinion – will result in strengthening the entire community and the region of the V4 countries.

Amidst the rising economic challenges, geopolitical conflicts in the EU’s neighbourhood and substantial disagreements between Member States, we need to strive to find flexible crisis management tools that will enable us to deal with these compounded crises effectively. At the same time, we should respect the democratic and constitutional order of each Member State. That is why, if we wish to minimise the risk of the collapse of the European project, the EU leadership ought to materially change their rigid approach toward designing the Union for future generations. The Member States should focus on those areas where there is room for impactful collaboration, instead of playing a blame game which only leads to further disintegration of our community. In the aftermath of Russia’s aggression against Ukraine, we can already notice a considerable shift in EU policy, made possible in the case of some Western governments due to significant pressure from grassroot social movements. It is a clear sign that the voice of civil society is important, and we are glad that it will be possible for it to be heard fully during the ongoing Conference on the Future of Europe.

The originator of the report is the Sobieski Institute – a Polish think-tank operating since 2005, whose mission is “Creating ideas for Poland”. Our partners were experts from the following think-tanks:

The project was finansed by International Visegrad Fund.